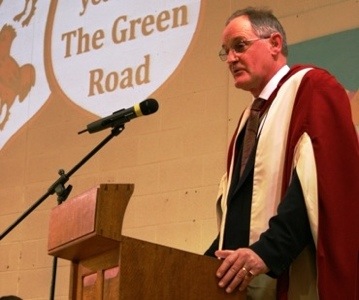 On Tuesday evening there was a surprise leaving party for Dr Roger Wilkes at QEGS. I didn’t attend, but those that did tell me there wasn’t a dry eye in the house. The party was sprung on Roger during the afternoon by his family and he turned up to the school hall in the evening to find it packed with current and former teachers, Governors, pupils, PTA members and other invited friends. A mixture of touching speeches, thoughtful personal gifts, and personal entertainment (culminating in a performance by former pupils The Rash) brought the house down. Among the gifts was a replica of his traffic light system to put outside his shed at home.

It sounds like a really well-planned touching finale for one of the Town’s best known figures.

/kʊk/ Not a chef, not an epicure, not a foodie. Just one who likes to prepare food – What really happens in the kitchen and on the high street is what I write about. Follow me on Twitter @Justaukcook and on https://www.facebook.com/justaukcook
View all posts by justaukcook →
This entry was posted in Review and tagged ashbourne, Dr Roger Wilkes, QEGS. Bookmark the permalink.

1 Response to Dr Roger Wilkes signs out amongst friends