The Deutsches Museum in Munich. Probably the finest museum in the world 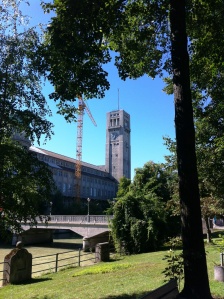 Museums can be dull, exhausting and poorly presented. They need to entertain and inform both young and old. I have visited the British Museum many times. It’s beautiful but I find it often overcrowded and it’s hard to get the narrative. I much prefer the Musee D’Orsay to The Louvre for the same reasons and the Vatican is just intimidating. I’m not sure whether Jorvik is really a museum or a ride. I have developed a lifelong love of art galleries from the Bowes Museum in County Durham, can happily spend a couple of hours at the drop of a hat in the Birmingham Museum and Art Gallery and love the history and reconstruction of Ironbridge Gorge sites. I’ve done my fair share of rainy day holidays and school trips – certainly enough to know a good museum when I see one.

The Deutsches Museum in Munich is probably the best museum I have ever visited. The scale and purpose of it is breathtaking and many British museums could learn from it. It claims to be the world’s largest science and technology museum with 28,000 objects on display and over 50 scientific areas covered.

The main museum is located close to the city centre – walkable from most of the tourist hotels. I say “main” because it is now so huge that the automotive (Verkehrszentrum) and aerospace (Flugwerft Schleissheim) sections have their own museums in different locations. The site is enormous and it’s purpose is to cover science in an academic and historic way. The museum is open every day between 9am and 5pm and admission to the main museum is only 8.50 euros. You can buy a ticket to all three sites and visit over a number of days for only 15 euros. There are concessions on top of this for OAPs, children and family groups. It is amazing value. Although they get over a million visitors a year it is all so big that there are no queues or crowds three deep round the popular exhibits.

We arrived at the main entrance and went straight for the Mining section. The guidebooks suggested this was the place to begin. Imagine how British museums would cover the subject. I’ve been to slate mining, lead mining and coal mining museums (I had one of those childhoods – don’t start me on stately homes) and the emphasis seems always to be on how hard life was and how the community operates. The story would be about canaries, the trade unions, the camaraderie and the disasters rather than the industry. Here, and maybe it was the language gap, there didn’t seem to be room for

sentiment. Down some stairs you walked into an impressively faked coal mine. To either side of the tunnel were exhibits with a historical perspective on the different ways of creating a pit and extracting coal going back to mediaeval times demonstrated by dioramas and beautiful models. As the methods got more modern there were scenes including the drills, explosives and water injection systems. More modern still and there were the huge underground trains, the lifts for men and ponies and the rescue vehicles. Once coal mining through open cast, drift and pit mining was completed there were whole other sections on salt mining, lignum mining, potash mining and iron ore extraction – all with equipment. The whole message of this part of the exhibition was on how much better we have become at getting stuff out of the ground safer and in greater quantities.

Once past this section there were big rooms with fantastic models and exhibits where there were buttons to press showing what happened afterwards – how you get iron from iron ore, table salt from the mined blocks etc. The chemistry and the processes were fully explained at a scientific level in both German and English. You could enjoy it at the level you were most comfortable but if you wanted the full detail too you could get it. It made me think that sometimes we dumb down too much rather than give people the choice. The exhibits seemed to stop in the late 1980s so I am sure there are more modern things to show when the museum gets round to acquiring them and revamping the exhibition (maybe not in the current economic climate). The “above ground” rooms were huge and quite clinical – this isn’t a cosy place. The whole section took us well over an hour to work through and, to someone who is not particularly fascinated by either science or mining, was breathtaking. It also provided an insight into the German success story. It was clear they are very proud of their engineering businesses that can make enormous grey machines good at extracting minerals.

We moved on to the section on computing – something of a favourite of mine. I started working in the computer industry in the mid 1980s – right at the genesis of the IBM PC. The exhibition began with logic engines – mechanical devices which calculated complex sums before and contemporary with Charles Babbage’s machine. Instead of just one example, each case had lots. The text explained in detail the binary system and there were lots of button-pressing opportunities. The story moved on to the computer age with an explanation of turning electrical circuits into computers. There was a section on the processes needed to create the right quality of silicon, the first primitive circuit boards and then progressively smaller, denser circuits with surface mount technology and magnifications of the more recent printed boards. Memory chips and disk drives were magnified and sectioned. The descriptions went to text book detail. The first proprietary computers were lined up and there was a sit-down section to try some of the first basic logic-based games. The narrative unfurled with some of the very large racked mainframes and washing machine sized disk drives before leading through supercomputers and PCs. Again the story ended around 2000 but anyone wanting to understand the basics of computing would be overloaded: I loved it.

There were sections on mathematics with some very advanced touch screen computer models and simulations, hands-on exercises with wooden blocks and games. Next door was a whole suite on telephony, communications and broadcasting with working telephone exchanges and TV studios. Typical of the ethos was the opportunity to place a telephone call from a handset and see the insides of the old telephone exchange connecting the call.

We barely scratched the surface in the four hours we were there. I could easily have spent far longer – the limiting factor is physical tiredness from walking up, down and along, and the opportunity cost of not seeing some of Munich’s other sited rather than lack of interest. We walked past a room with an enormous sailing boat in it, sat in an inspection pit, quickly went through the room full of looms and carding machines, looked briefly through the doors at the musical instrument and photography exhibits and ended up in the power room. An audience was gathering round a large caged-off area. Two men in white coats duly arrived, dimmed the lights and began talking. We didn’t need to understand the words, just cover our ears when everyone else did. For 15 minutes they made enormous bangs and flashes – passing many volts noisily and spectacularly through a sheet of glass – demonstrated a lighting strike on a church tower and even had one of them sit in a large Faraday cage while the other turned up the power.

One discussion we had was about the balance of exhibits. In the section on textiles we would have expected a succession of British inventions rather than the wide range of exhibits from other nations as well – an indication of the way we are taught history? A bias towards Germany?

If you visit Munich and have some time to kill I really would recommend visiting. With the relatively low admission cost just try and look through a couple of sections you are interested in. If you are there for longer wade in and fill your boots with knowledge.

/kʊk/ Not a chef, not an epicure, not a foodie. Just one who likes to prepare food – What really happens in the kitchen and on the high street is what I write about. Follow me on Twitter @Justaukcook and on https://www.facebook.com/justaukcook
View all posts by justaukcook →
This entry was posted in Arts, Review and tagged Charles Babbage, Computing, Deutches Museum, Flugwerft Schleissheim, IBM, Industrial Revolution, Mining, Munich, Museum, Verkehrszentrum. Bookmark the permalink.