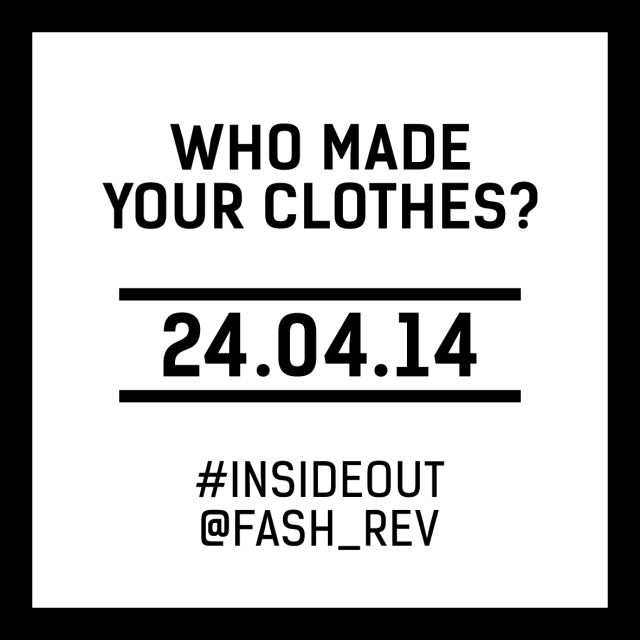 On April 24th, around the world, people will be looking closely at their clothing thanks to our very own Carry Somers, owner of Pachacuti. This is something which is accessible to all of us. It’s not often that we look beyond our local day-to-day lives and can make a difference on a wider stage.

We are becoming far more interested in provenance. We want to know how and where things are made and this is influencing our buying decisions. The food industry has led the way. Ashbourne has been a Fairtrade town for many years – a movement based on products sourced from ethical producers. We are used to inspecting additives in food and being aware of salt, fat and sugar content as a matter of course. We are very aware of the welfare issues associated with farming and we make choices accordingly. The organic movement has transformed the range of products available to us and we have never been as aware of the consequences of what we eat from a calorie, allergy or intolerance standpoint. Increasingly restaurants are proud of their support for local producers and some are even printing food miles on their menus. Where there are problems there have been high-profile campaigns to address them: transportation of livestock, contamination of eggs, sustainable fish stocks, quality of school meals and battery farm production are just some of the stories which have graced the front pages of our newspapers.

We are starting to see the same values being applied to other products. Companies have been boycotted over the years based on their willingness to pay tax, their involvement with Apartheid, and their trading practices. Taking a stand used to be seen as a minority, hippy activity but it is now being seen as normal consumer decision-making. We are better informed and more organised than ever before.

What still remains to be tested is our willingness to pay more to back up our principles. We are happy to change suppliers (the basis of most “boycotting”) but the jury is out on whether we are willing to out our money where our mouth is. There is a dissenting voice which argues that arguments of principle are the luxury of the wealthy – that some people can only afford the maltreated Brazilian chickens. When we are asked by pollsters four out of five people say they want companies to help alleviate poverty (Fairtrade Foundation) and Carry says that her research is that 76% want companies to be open about the factories where their products are made. Crucially three-quarters said they would be willing to pay 5% more if they were guaranteed that the clothes was made by workers in safe and fair conditions. Other research from Australia however suggests that a shocking 61% of fashion brands don’t know where their own clothes are made and 93% don’t know where the raw material comes from!

Carry Somers has initiated a global day of action looking at the fashion industry. The Fashion Revolution Day Fashion Revolution website takes place on 24th April. Carry was lying in her bath after the Rana Plaza disaster when she had a eureka moment. The factory in Bangladesh collapsed killing and injuring thousands of people working in the garment industry. Suddenly it became apparent that these poor working conditions and safety standards were embodied in the clothes we all wear. They were producing clothes for the British High Street retailers which were being sold to us at enormous markup. Carry’s own business, Pachacuti, has been based on ethical Fairtrade production. She visits the suppliers regularly to ensure the standards are being maintained. Shouldn’t we be as certain of the provenance of everything else we wear?

She contacted some of her friends in the fashion industry and the idea blossomed into a simple concept. There is a great video and blog by journalist John-Paul Flintoff here which explains more about the event. http://www.flintoff.org/what-is-fashion-revolution-day

The call to action is that on 24th April you take a selfie of an item of clothing being worn inside out and tweet “I’m wearing my clothing #insideout because….. and I want @brandname to tell me who made my clothes”. If you want to do more…all the better. The response from the manufacturers will be interesting and could be revolutionary!

/kʊk/ Not a chef, not an epicure, not a foodie. Just one who likes to prepare food – What really happens in the kitchen and on the high street is what I write about. Follow me on Twitter @Justaukcook and on https://www.facebook.com/justaukcook
View all posts by justaukcook →
This entry was posted in Articles and tagged @fash_rev, April, ashbourne, Fairtrade, Fashion, Fashion Revolution, John-Paul Flintoff, Pachacuti, Rana Plaza. Bookmark the permalink.