Ashbourne’s High Street succeeds against the odds. With high parking charges, poor signage, and no coordination it’s a tough life for a retailer in our town. But we do have some excellent independent retailers who have learnt to look after themselves. Some time ago I wrote about Beverley in East Yorkshire and highlighted a town which seemed to be getting it right. This weekend I found a lesson much closer to home in Leek.

I was alerted to it by market traders. We are losing traders to Leek because they feel wanted and supported there. They feel that the town appreciates its markets and makes it easy for people to trade there. I wanted to see it for myself.

The first thing that strikes you is that some things are the same. Leek is very busy on a Saturday and there is a lot of traffic. This was added to by some roadworks but it didn’t really impact on our experience. The second thing was the parking – the nearest car park for Ashbourne – Queen Street – is a short stay car park with a charge of £1.40 for 3 hours which was plenty for our visit. 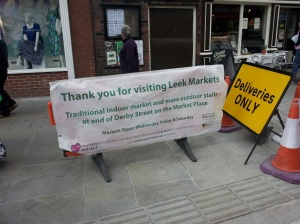 The signage was fantastic. Right next to the ticket machine was a map of the town pointing out the key features. There are ample attractive street signs pointing the direction to the markets. The first market was just a couple of hundred yards away. And what a market. It was immediately obvious why our traders are defecting. For just a couple of pounds more they get a modern gazebo which means when the rain comes and the wind picks up they can more or less enclose the stall to keep customers and stock warm and dry. There was also a large sign thanking customers for visiting.

The thing which was unavoidable from then on was the joined up nature of the town. They have adopted the Totally Locally approach www.totally-locally.co.uk. The local traders get together once a month to discuss their plan of attack and then work with each other to make it happen. This is everybody… no discrimination between shops, markets, estate agents, pubs. The town is covered with Totally Locally material which reminds everyone of the importance of supporting local independent retailers. This reminds the shoppers why they should shop locally and makes them feel good about what they are doing. A very high proportion of the retailers display these signs. The one I really liked was the one which each outlet showed of the number of local businesses – window cleaners, accountants, suppliers etc that their business helps support. 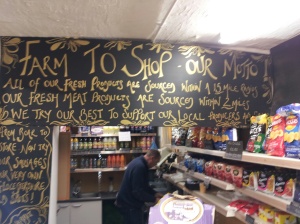 The impact of this was that there are some really interesting retailers in the town. There are shops which you imagine would struggle to survive in other locations. There is also a real culture of progress. We spoke to one retailer of vintage products who said she started on the market and had only recently moved into a shop. The town had three markets when we visited – the covered market and then one either end of the pedestrianised high street. The one by the tourist information centre was more farmers market and antiques whereas the one we first visited had more general stalls similar to Ashbourne’s main market. The Totally Locally theme can only go so far. It helps to brand the town, build awareness and provide some visual aids. It is then up to the retailers to take it a step further and there were some really good examples of this. 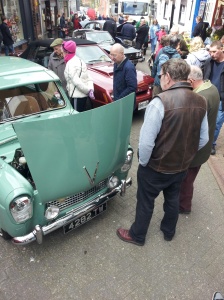 Of course, as it was the Easter Weekend they had organised a display of vintage cars all around the streets and this was clearly bringing in visitors to add to the footfall. They had some street entertainment and a DJ. This setting would work both ways – it will be a much easier setting for the exhibitors as well as for the Town.

Of course, Ashbourne is in a far better place than Leek. We are on the tourist run into the Peak District, we have a magnificent natural setting with the Market Square, Victoria Square, the area by Waitrose, all the little yards around the town and a good set of retailers to start with. Totally Locally provides a lot of free resources and then some further paid resources if required. The list of towns they have helped is impressive and includes Belper, Bakewell and Stone alongside Leek. It is about towns helping themselves and I think Leek is a particularly vibrant example of a town which has gone for the model completely. I dare say there are some on the list who have gone for the free stuff only and not seen a big improvement. 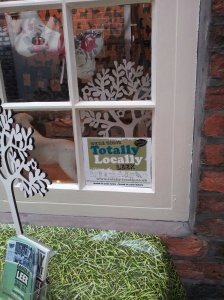 I don’t know how the Totally Locally model is working financially but I did think that the people I spoke to and what I saw portrayed a buoyant local pride and genuine excitement amongst local traders. It was a fun place to be as a shopper. Totally Locally only provides a framework which is inherent in many successful High Streets. There is clearly a role for the local council but the impression I had was that they just needed to be supportive of what the traders wanted to do and the traders themselves organised a lot of the activity but shared the load. It also serves as an excellent model to show that congestion and car parking are not unique problems but they are subjective and the answer is to enjoy them as a sign of success rather than raise parking prices and try and bypass them away from the town.

/kʊk/ Not a chef, not an epicure, not a foodie. Just one who likes to prepare food – What really happens in the kitchen and on the high street is what I write about. Follow me on Twitter @Justaukcook and on https://www.facebook.com/justaukcook
View all posts by justaukcook →
This entry was posted in Review and tagged car parking, Congestion, High Street, independent retailers, Leek, Markets, retail, Totally Locally, www.totally-locally.co.uk. Bookmark the permalink.