It takes more than Eric Pickles, Patrick McLoughlin and NBE16 to stop a lap-dancing club 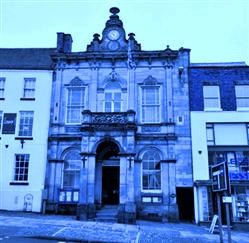 Imagine Ashbourne in twenty year’s time. It’s a very different place than we have now. Overlooking the whole town centre is a 12-storey block of flats built on the edge of the Rec. It was a very efficient way of solving the housing problem. The Memorial Gardens have been turned into the managed garden for residents only. The play area had to be removed but Ashbourne is now really a place for older people. Most of the local businesses moved to Derby and Uttoxeter long ago. They couldn’t get the employees they needed locally and they weren’t allowed to expand so they didn’t really have a choice. The lack of jobs means its not quite the place to bring families. The fact that QEGS is in special measures doesn’t help either. The High Street is a little different; there are quite a few boarded-up shops and many of the independent retailers have long since gone. There are night clubs, lap-dancing bars and amusement arcades with neon aplenty now. They are very popular with stag and hen parties coming for a wild night out and the bikers at the weekend but on week nights it is eerily quiet. Market Square NCP car park is concreted over and those that can afford it are very happy. There is no market now. The Town Hall is in a small office on Waterside Park – they got a good deal on one of the vacant units that are still being built and the old building has been converted into flats.

You may assume that this is a completely scaremongering dystopian vision – “they” won’t let it happen! Realistically though these outcomes rely on relevant and current legislation or regulation and other towns have found themselves transformed in a short period of time. Our national Government is not concerned with the minutiae of daily Ashbourne life. The world I have described is all legal and above board and most of it is a result of market forces rather than policy. If anything the indiscriminate location of housing is encouraged by the National Planning Policy Framework and Localism Acts which effectively now put the benefit of the doubt in the hands of developers. Good luck to anyone who tries to influence the likes of Eric Pickles and Grant Shapps in shaping the future of a small town – our own MP carries the same colours and has failed. We should just be grateful that we don’t have other nationally controlled issues such as HS2, fracking or nuclear industry on our doorstep.

Step forward surely our first white knight – our County Council. They are responsible for the big capital projects. If we want a bypass or we want our schools to improve it’s the County Council in its various forms that will help us. We don’t have a great track record of getting our County Council’s attention either. In relative terms we are an affluent part of their domain and, at a time of economic constraint, it would be unrealistic for us to expect a change of County Council focus.

We start to “matter” when it gets to District Council level. Some of the things described above definitely do fall into their sphere of influence. They attempt to protect all of their constituent communities through the Local Plan. In legal decisions the Local Plan takes priority over national legislation – it fills in a bit more detail. The Derbyshire Dales Adopted Local Plan historically states that St Oswald’s School and the land adjacent to Belle Vue Road, the land adjacent to St Oswald’s Church and land at the rear of 40-120 Mayfield Road are “Important Open Spaces” which need protecting because of their contribution to the character and appearance of the town – no building there then. It can be remarkably detailed – the parking spaces need to be 4.8m x 2.4m and on no more than a 1:14 gradient. In other areas they are also inconveniently vague. The nonsense over the colour of Ashbourne shopfronts has been driven by a statement that planning permission to change shopfronts will only be granted where “the design and materials reflect the character of the building itself and, where appropriate, are also well related to adjacent properties”.  Someone somewhere has taken it upon themselves to determine the colour palette in our name – I have visions of a dusty office in Matlock festooned with swatches. Poor old Coffee Stop was removed from Shawcroft by a number of Local Plan policies. One of my favourites that was used was NBE16 – “Planning permission for development will only be granted where it does not have an adverse impact upon the special character or setting of a listed building”. This was interpreted to suggest that the cafe could be seen out of the back window of a listed building on St John’s Street and it is was ruining the aesthetics of it. I assume that the bins, recycling area, air conditioning units, stretches of concrete, unmatched fence and signage don’t have the same impact.

Out of necessity Local Plans can’t be overly detailed. The clauses have to be applied to all the towns in the area and there is a huge amount of interpretation required. Someone somewhere in the planning function has to take on the role of adjudicator and set a precedent for years to come. The guidelines can be bent and manipulated to suit the needs of landowners and competitors. This is how we end up with decisions which seem like the work of jobsworths and which don’t have the views of our town at heart. On balance the Local Plan must be a good thing. It protects the green spaces in our town centre and keeps the Georgian character of the High Street. It’s weakness is the necessary vagueness of its policies and the risk of fossilising the town rather than giving scope for development and progress.

Although it has backfired horrendously the Localism Act did have a beneficial spinoff. While opening up communities across the country to a house-building free-for-all it wasn’t intended to do so. It was intended to give control to local people through the creation of precisely defined Neighbourhoods and Neighbourhood Plans. These were not mandatory but if local people wanted to group together and take control they could do so within a clear framework. Ashbourne picked up this baton in 2012 and the Neighbourhood Plan team has been working ever since to put this vital defence in place. Ashbourne has been recognised as a Neighbourhood and a draft plan will be put forward for inspection shortly.

All those gaps and anomalies can be filled in by a very specific plan created by Ashbourne people for Ashbourne. We can define exactly what we mean by “adverse impact” and “special character”. If we want Coffee Stop to stay we can make sure that the Local Plan is interpreted in a way that ensures it. We can define the places which mustn’t be developed and, just as the Local Plan takes precedence over national legislation, so the Neighbourhood Plan takes precedence over everything. We can specify very precisely to defend against all those things we don’t want – the maximum height of development, how our shopfronts can appear, which kind of businesses we want to encourage in the area (and those that we don’t want to darken our doorsteps).

This is all a long-winded way of explaining what the Local and Neighbourhood Plans are and why they matter to you and your nearest and dearest. Of course, you can leave it to politicians but don’t moan and be surprised when you lose the very things that attracted you to Ashbourne in the first place. They don’t know our town – even our representatives only have a partial view of what matters and what we want. All the anger and publicity at the moment has been on the current housing challenges but this is just an immediate example of the impact of the Plans. Their content when approved will certainly affect your house value wherever you live. It will affect the amenities you can enjoy, employment prospects, what you can buy and where you have your morning coffee. It will impact the number of tourists who come to our town and the message they take away with them. If they aren’t approved we will have no defence against the growing group of sharks circling the town waiting to pick off opportunities one by one.

The nightmare vision I painted at the start of this article was not a million miles away from the views of some of the participants in the first Neighbourhood Plan meeting. All participants were asked to focus on their hopes and fears and describe them by filling in the blanks in this sentence:

Try it for yourself with both your optimistic and pessimistic hats on. Hopefully you will realise that those outcomes don’t just happen and that, thanks to the Localism Act, you really can make a difference. If you still don’t appreciate the significance maybe rereading the first paragraph of this article will change your mind.

There are two Public Meetings coming up to discuss the results of the Consultation. The first is at 7pm on Tuesday 16th July. Details are here.

/kʊk/ Not a chef, not an epicure, not a foodie. Just one who likes to prepare food – What really happens in the kitchen and on the high street is what I write about. Follow me on Twitter @Justaukcook and on https://www.facebook.com/justaukcook
View all posts by justaukcook →
This entry was posted in Opinion and tagged ashbourne, Eric Pickles, fracking, Grant Shapps, HS2, Local Plan, Localism Act, National Planning Policy Framework, Neighbourhood Plan, Patrick McLoughlin. Bookmark the permalink.